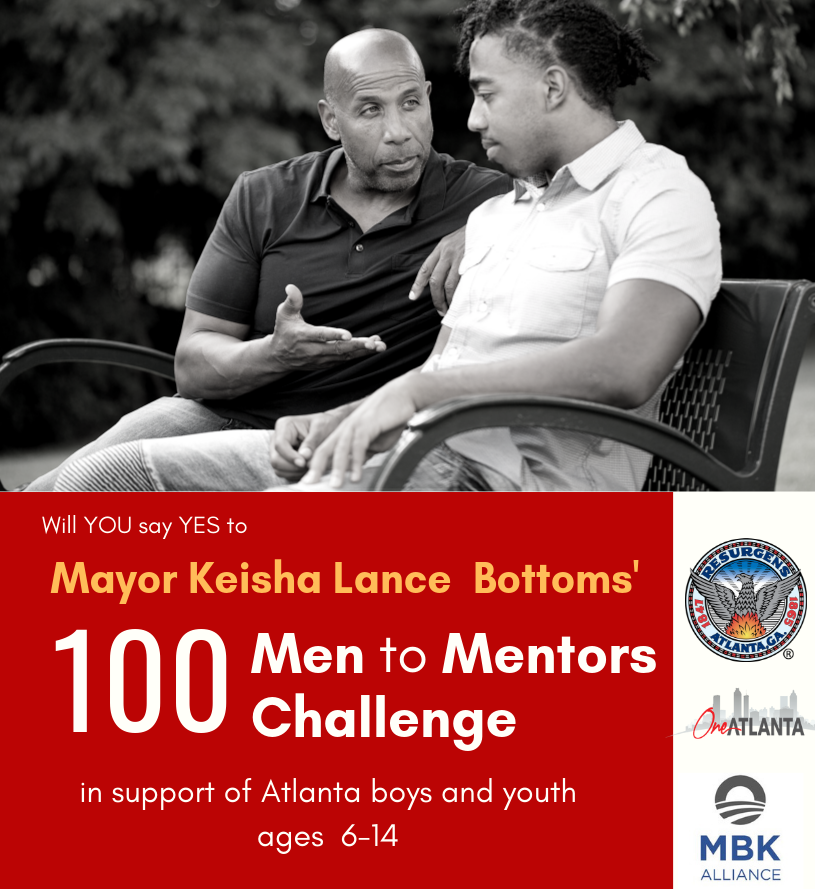 As a prelude to the launch of the City’s My Brother’s Keeper initiative, the City of Atlanta is partnered with Big Brothers Big Sisters of Metro Atlanta to help secure mentors for the 100 Atlanta boys who are currently on a waiting list to be matched with mentors.

“As the mother of three boys, I know how important it is for youth in our communities to see and engage with positive male role models” said Mayor Bottoms.

“It is up to all of us to create the kind of city that we want to live in and I am confident that the men of Atlanta- be they barbers, teachers, City employees, public officials, corporate executives, athletes, entertainers and every occupation in between- will answer the call to help us create a city where our boys see and believe that they can become anything they dream of being.”

As part of the One Atlanta vision, the City of Atlanta is working to expand opportunities to residents, and Atlanta’s youth in particular.

“At its core, the Office of One Atlanta exists to avail resources to residents who have not had an equitable chance to participate in the attributes that make Atlanta an attractive city to so many, “said Bill Hawthorne, Chief Equity Officer of the City of Atlanta.

“The people of Atlanta are our city’s greatest resource. We are therefore proud to serve as a connector of the men who make this city move, with the boys who will grow up and move Atlanta into the future.

We are also appreciative of the opportunity to partner with an organization as well-respected as Big Brothers Big Sisters of Metro Atlanta.

Earlier this year, Hawthorne and other City officials met with leaders from Big Brothers Big Sisters of Metro Atlanta.

Upon learning that there are 100 boys who live in Atlanta who are on a waitlist for mentors, Mayor Bottoms committed to elevating the importance and the impact of the work of Big Brothers Big Sisters, which has been “Defending Potential” of local youth for nearly 60 years.

The organization, which came under new leadership in 2018, has a longstanding track record of work which aligns with Mayor Bottoms’ goals of building a safe and welcoming city with thriving communities and neighborhoods and residents who are equipped for success.

“We are honored to partner with the Mayor’s Office as part of Atlanta’s My Brother’s Keeper initiative.”, said Kwame Johnson, President and CEO of Big Brothers Big Sisters of Metro Atlanta.

“Our initial goal is to match the 100 boys we have on our waiting list in the city of Atlanta. Through this partnership, we can help defend the potential of students that are seeking a Big Brother mentor to help them navigate life. I personally know the impact of mentorship and I am excited that Mayor Bottoms is offering the support of her administration to help more young boys reach their full potential.”

Atlanta men who are interested in answering the Mayor’s call for mentors may visit www.atlantaga.gov/MenToMentorsChallenge to learn more and register for an upcoming information session. All local men are encouraged to join this citywide call to action.

Priority matching will go to men living in or near the 30315, 30318, and 30310 zip codes. In order to serve as a Big Brother, registrants must be over the age of 21 and able to commit to meeting with the appointed Little Brother a couple times a month for at least one year.